I also admit it’s pretty darn bold of me to give advice to beginners, when I am in so many ways just a beginner myself. My music production company has been in business for less than a year. But on the other hand, I’m old enough to remember when CDs were invented and when mullets were cool, so I hope that with age comes some wisdom that others can benefit from. As I like to tell my mentees, “I’m not any smarter than you; I’ve just been around longer, so I’ve had time to make more mistakes than you.” (The mullet, by the way, was definitely a mistake.)

I’ve been thinking about what advice I wish someone had offered to me back when I was just a kid trying to write music, with the occasional crazy idea that someday maybe that would be the main thing that I’d be doing and that someone might be even crazier and be willing to pay me to do it. Alas, I can’t go back in time and offer this advice to myself, but the next best thing is to publish it here on the internet for all the kids (and those with child-like hearts) who still have these crazy dreams…

Obviously the list could go on and on. But I really do think that these ten things are the things that I wish I had known dozens of years ago. Instead I probably was fixated on getting my mullet just right, or saving up some money to buy the coolest new keyboard (so that I could sound like everyone else).

It’s been years, but like I said, I’m still a beginner (just in different things than before), so I’d love to hear any advice that you can give me …

Last Friday, something truly remarkable happened in my living room: A group of about 30 people came together; some musicians played;we all hung out together, listened to great music, and had great conversations. It’s called a “house concert.”

What is a house concert? 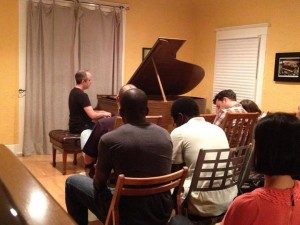 It’s pretty simple really: It’s a concert at a house. Note that I didn’t say “a party with music.” At a house concert, the music is the main priority. Sure, there’s probably food and drink, and there’s probably time before and after the concert to mingle, but during the concert itself, people sit, stop talking, and give their attention to the music.

How do you have a house concert?

First, you’ll need a house. It helps if the house has a piano (but maybe that’s just my bias as a pianist coming through). You’ll need a space in the house where people can sit comfortably and listen to music. The space needs to be large enough for the musicians too, of course. Not all houses are suitable for all kinds of music. I recommend having a space for 20-30 people. But there are no rules; that’s one of the things that’s so great about house concerts. You can have one with only 10 people, but I think with more than 30 people it starts feeling impersonal. You want musicians to be able to connect with the audience and for the audience members to connect with each other.

Next, find some musicians! Maybe you yourself are one. The concert could be one musician. Or it could be more than one. I suggest 30-60 minutes of music. It’s probably best to stick to minimal and acoustic genres. Your neighbors might not appreciate heavy metal or heavy bass and drum techno. Some ideas: a solo songwriter with acoustic guitar or piano, small classical ensembles (such as piano and/or a few string instruments), maybe a jazz trio (if you have the space for it). 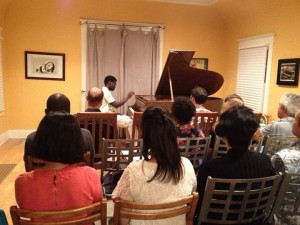 And, lastly, invite people. Use all the same techniques you would if you were throwing a party: word of mouth, email, Facebook, web-based invitations, etc. When you invite people, make it clear that it’s a concert, not a party. Make it clear what time the music starts and discourage people from coming in late. (Tell people arriving late to come in the back door, so that they won’t disrupt the concert.)

The person hosting the concert can provide the snacks and refreshments, or you can go with a potluck approach, but I find that can lead to problems if not properly coordinated (for example, 20 people all bring desserts). You might ask for a voluntary donation (or just charge admission) to cover the cost of the food and drink. As a general rule, the host of a house concert isn’t going to make a profit; you’re just in it for the love of music.

Why have a house concert?

A house concert is also a great way for music lovers to connect with other music lovers. If the right audience has been invited, there will be people there who don’t know each other yet, but they’ll have something immediately in common to talk about: the music that they’ve just heard. Chances are, people will meet other people who share similar music interests. (By the way, I met my wife at a house concert!)

The listening and viewing experience in someone’s living room can be far better than the back row (or even the front row!) in a club or auditorium. For classical music, it’s pretty amazing to watch virtuoso instrumentalists from just ten feet away. 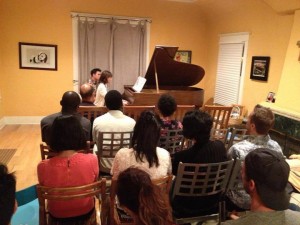 It’s also a great way for musicians to promote their music. They can sell CDs, sign up people for their newsletter, and network with other musicians.

It’s a non-threatening environment for a musician to try new things. A songwriter can get feedback on new songs. Or a musician can try out a whole different musical style than what they normally do. Or a classical musician can run through material that they are preparing for a recital or a competition.

Lastly, as someone pointed out last Friday at my house concert: “An evening of great music in a great setting, shared with great people… do we really need any other reason to be doing this?”