Is music an essential skill?

Should music be considered an essential skill? If someone (at least in the United States) graduates from high school without knowing how to read, write, or do arithmetic, most people would say that there’s something lacking in that person’s education. What if the high school graduate can’t find the United States on a map of the world? What if they can’t explain, at least in simple form, how the United States came to exist as a country? But it strikes me as odd that few people would question similar deficiencies in music. If someone can’t read music, can’t play an instrument, can’t sing, and can’t identify the name of an instrument from its sound, then I suspect most people would put that in the same category as “can’t dribble a basketball” or “can’t speak French.” Is that weird, or am I biased because I’m a musician?

I’m just thinking out loud. Sorry, I don’t have any answers.

If I could go back in time and give advice to my graduating college class, I would tell them, regardless of their career aspirations, learn to write well. I could give a million examples why good writing is important, but here are just a few:

Knowing the basic rules of grammar and punctuation, not to mention spelling, will make your communication stand out from the crowd. There’s nothing like ” i would suggest listenning to some jazz or for more understanding of something out of place but being intentfullly done that way, maybe some noise so soften you into the concept haha” to send the message that you are 14 years old and playing an out-of-tune guitar in your parents’ basement.

Here are ten very basic guidelines to improve the quality of written communication. This is just a list of very simple, mechanical, principles that address the most common mistakes in writing, so if you just follow these there’s a good chance that your writing will be above average. Obviously, writing goes far beyond these mechanical things. In today’s world of hyper-abbreviated channels like text messages, Facebook comments, and tweets, you’re not going to be constructing elegant story arcs, but hopefully you’ll still be able to impress your readers and make them want to hear a little more from you… or at least not make them want to hear less.

This one is such a no-brainer that it’s hard to understand why people skip it. When I was working in the HR department of a software company, it was amazing how often we saw cover letters from applicants with simple typing mistakes such as “I’m an expert in web desine.” This suggests sloppiness, which is not the most desirable trait in a web designer.

2. Punctuation goes inside a closing quote.

3. Know when to use single quotes.

Single quotes are used to indicate a quote within a quote.

Technically, with each level of nesting you toggle between single/double quotes, but such sentences are hard for the reader to parse and can probably be expressed in simpler ways:

4. Use italics to indicate emphasis.

If you have access to styled text, then italics is used to indicate emphasis. In text-only email you can enclose the *emphasized* text in asterisks. Don’t make up random ways of emphasizing text, like “putting it in quotes” or ‘putting it in single quotes’ or Using Capital Letters. And PUTTING IT IN ALL CAPS IS RIGHT OUT.

5. Don’t capitalize words that don’t need to be capitalized.

6. A comma separates the parts of a compound sentence.

This is a compound sentence because each part can stand on its own as a sentence:

When the subject (“I”) of the second part of the sentence is removed, what we’re left with is no longer a compound sentence, and therefore there should be no comma.

You can tell that this is not a compound sentence because the two parts can’t both stand on their own:

To help you remember this rule, remember that “compound” and “comma” both start with “com.” Then all you need to do is remember how to tell if it’s a compound sentence.

Here’s an example of a penultimate comma: I went to the store to buy mic cables, a mic stand, and a pop screen.

Here’s the example again but without the penultimate comma: I went to the store to buy mic cables, a mic stand and a pop screen.

So which one is correct? The answer is… it depends. Most business communication tends to be conservative and preserves the comma. But artists, well, they like to think different.

How to End a Drought

Some people have asked what to do when you’re in a dry spell as a creative person. We’ve all been there: You just feel burnt out, not enjoying what you’re doing, and you start to wonder if you’ll ever write another song again (or write a story, or paint a picture, or whatever it is you do). Here are three things that I’ve found work for me as a composer.

I hope this helps end your drought!

How to Become a Composer

A young guy asked me this morning for my top three pieces of advice on how to become a composer. I told him:

1. Make sure you’re asking the right question. Do you already write music? Do you like writing music? If you didn’t answer yes to both of these questions, then my answer is that I don’t know. I also don’t know how you can become a squirrel. But if you do already write music and you like writing music, then you are already a composer. The question isn’t how to become a composer, but how to become a better composer. And in fact you’re going to be asking that question the rest of your life.

3. Write music for at least 15 minutes every day, 5 or 6 days out of every week. Don’t just write music when you feel like it, because you won’t always feel like it. Sometimes your job is just to show up. Sometimes when you show up, even if you don’t feel like it, inspiration will meet you there.

One thing that’s bothered me about Pro Tools for years now is that there’s no (obvious) way to select  discontinguous regions.  I put the word “obvious” in parentheses, because I’ve always suspected there was a way but just not something that didn’t involve animal sacrifices and incantations in ancient Babylonian.

I just figured it out, and fortunately it didn’t require the death of any animals.  Select the “grabber tool.”  If you continue to hold down the mouse button you’ll see that the grabber tool is actually a collection of 3 tools: 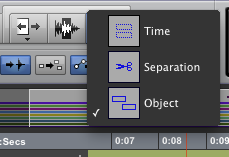 Select the third one, the “object grabber” tool.  (Note that the object grabber tool can’t be used in shuffle or spot mode; if you’re in one of those modes, Pro Tools will warn you and then switch into slip mode.)  Now that you’re in object grabber mode, the mouse cursor will change into an “object selection” shape whenever it passes over a clip (or “region” if you’re still working with an older version of Pro Tools).  You can click on a clip to select it.  But here’s where the magic happens:  You can hold down the shift key and click on a clip to select it in addition to previously selected clips.  The selected clips can be discontiguous, and they don’t even need to be all on the same track.  Having selected any number of clips, you can apply all sorts of editing operations to them.  I haven’t experimented to see if there are some editing operations that can’t be applied to discontiguous selections.

This has many useful applications.  For example, let’s say you have a pop song with a standard intro-verse-chorus-verse-chorus-bridge-chorus-chorus structure.  You can select all the verses and do something to them, perhaps a volume trim, or mute/unmute some of the instruments.

The only limitation seems to be that the object grabber tool only operates on clips.  You can’t just select arbitrary ranges of time on arbitrary tracks.  But this doesn’t seem like too big a limitation.  If you’re trying to apply an edit to multiple discontiguous regions, you just have to remember to find those regions first and turn them into clips.  This of course has to be done region by region, because there’s no way to select all those discontiguous regions without them first being made into clips.