Why Remove Frequencies That Aren’t There?

I’ve read a number of articles that recommend removing “all subsonic frequencies, even if there aren’t any.” What does this statement actually mean? I assume they’re not literally recommending removing something that isn’t there; that would be like saying “you should remove the leopard in your back yard.” I’m guessing what they really mean is “do something that would remove any subsonic frequencies, in case there are any, and it won’t do any harm if there aren’t.”

A subsonic frequency, by definition, is one that’s too low for the human ear to hear, so of course you can’t detect such frequencies simply by listening. The nominal range for human hearing is 20 Hz to 20 KHz, but that range shrinks with age (especially the upper end of it). If, like most rock musicians, you’ve been exposed to loud sounds repeatedly without adequate hearing protection, I hate to deliver the bad news, but you’re probably already deaf to frequencies above 15 KHz.

How might subsonic frequencies end up in your mix?

If you’re recording any sort of “normal” music, it’s unlikely that you’ve captured any subsonic frequencies through a microphone. (If so, I want that microphone!) Microphones simply don’t record frequencies that low.

But synthesizers can easily make frequencies that low. Say for example you have a bass patch that’s doubled down an octave or two. If you play notes that are too low, you’re now hearing only the fundamental, and the doubled part has passed into the subsonic range.

It’s also possible (but not likely) that subsonic frequencies could have been created by some sort of faulty audio processing. For example, it could be a bad plugin.

Another possibility is that subsonic frequencies can be created by amplitude or frequency modulation. So certain kinds of audio processing, such as ring modulators, can create them.

Ultimately it doesn’t really matter how the frequencies got there; the more important thing is to be able to know whether there are in fact any subsonic frequencies in your mix.

How can you know if they’re there?

As already explained, you can’t hear a subsonic frequency, so you’ll need something other than a human ear. That thing you need is called a frequency analyzer (or sometimes a “spectrum analyzer”). Here’s a free one that works really well.

A frequency analyzer shows you what frequencies and how much of each are in your music. It has many uses aside from the one we’re talking about today. For example, it can help you pinpoint an annoying hum that you’re trying to remove from a track.

First try putting the frequency analyzer on your master output. Play the entire song and see if any subsonic frequencies showed up over the course of the song. Remember that the problem might only occur in certain parts of the song, for example where the synth bass plays.

How should you remove them?

The obvious tool to reach for is some kind of high pass filter (HPF), probably part of an EQ plugin. But you need to remember that a HPF has a slope; it can’t just block all frequencies below 20 Hz while letting in 20 Hz and higher. A real HPF looks more like this: 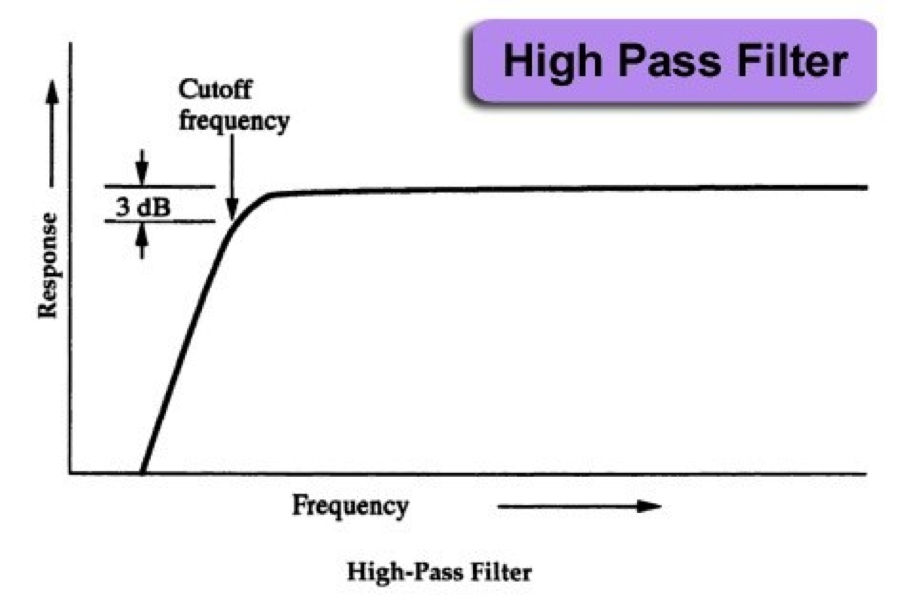 If you are able to isolate the problem to specific tracks, it’s best to insert the EQ on those tracks rather than inserting it on the master output. Even the best EQ isn’t 100% transparent. A HPF can introduce a phase shift, perceived as a bump, at the cutoff frequency. That effect might be imperceptible on your bass track, but you wouldn’t want your entire mix to be phase shifted around 100 Hz.

If your mix is being sent to a mastering lab, then they may be responsible for removing subsonic frequencies, and you might think that you don’t need to worry about it. But I try not to make any assumptions about where my music goes after it leaves my studio, so I want it to be as close as possible to a finished product. In the same way, you wouldn’t want to produce a mix that has a harsh 2-4 KHz frequency bump and rely on listeners to adjust the EQ on their playback system.

What harm could they do if you don’t remove them?

First let’s review how speakers turn electricity into sound. The electricity that goes into your speakers fluctuates in voltage very rapidly. Whatever the voltage is at any given instant corresponds to the position of the speaker cone. If you were to feed the lowest possible subsonic frequency, 0 Hz, into your speaker and change the voltage manually, you would see the speaker cone moving in and out corresponding to the movement of your hand on the manual voltage dial. Electricity of 0 Hz frequency has a special name, DC, and in the world of amplifiers and speakers, DC is a VBT (a “very bad thing”). Why? Well, turn up that voltage dial too far, and your speaker cone will eventually tear away from the rest of the speaker, and aside from the loud pop and impressive puff of smoke, this is not cool, because you now have a nonfunctioning speaker. For this reason, almost every audio amplifier has built-in circuitry to block DC current.

But what about very low frequency electricity, not all the way down at 0 Hz, but something between 0 and 20? Well, the situation for the speaker is not much better. If the speaker cone is moving that slowly, it’s not producing any sound that your ear can hear, but it is moving. But you have no way of hearing how “loud” this sound is, so if it gets very “loud” (i.e. the voltage gets too high)… pop goes the speaker.

Of course the same thing is true in the sonic frequency range. Obviously, if the sound is too loud, it might damage your speakers. But your ears will also hear the sound, and it won’t come as a surprise when the speakers get damaged. In fact, your ear drums might be damaged before the speakers.

Ironically, perhaps the most compelling argument for removing low frequencies (including subsonic frequencies, but even frequencies up to 100 Hz) is that doing so will actually give your music a more powerful low end. If you have a lot of low frequency content in multiple tracks, the mix will just end up sounding like a big muddy mess. The secret to creating a powerful, but not muddy, low end is to remove frequencies below 100 Hz on all but a few tracks (maybe even just one track) and letting those tracks use the frequencies below 100 Hz. In most popular music styles, the low end is going to come from the bass and kick drum. In many cases, it’s just the kick drum. This means that when you solo the other tracks (guitar, keyboards, etc.) they may sound like they don’t have enough bass, but if the kick drum and bass parts are written well, performed well, and recorded well, then those parts are all you need to supply enough low end. You can safely remove frequencies below 100 Hz on every other track.

In summary, there’s a variety of ways that subsonic frequencies might end up in your mix. The most likely way is bass synthesizer tracks. You can’t hear subsonic frequencies, but you can detect them with a frequency (spectrum) analyzer. If you detect them, you can remove them by inserting a high pass filter on individual tracks, and roll off frequencies below 100 Hz. Doing so will free up headroom in your mix and will also give your music a clearer, more powerful low end. It will also reduce the risk of damaging speakers, although that risk is already pretty low.